These mistresses wanted to teach this guy a lesson. He was rude and he did not listen to people. He was full of himself and he was generally a very unpleasant person to deal with. And that is why they chose to use pee to deal with him. He was even lucky that the mistresses had not decided to shit on him. But they told him if he did not change soon, there was no telling what they would do.

Mistress Julia wanted this guy to realize what she was not his equal and that she would not let him derail her. He was so good at it that he thought he could do it to her. She was yearning to show him that she was not the kind of person he thought she was. So she used her pee fetish to teach him that he was wrong about her. 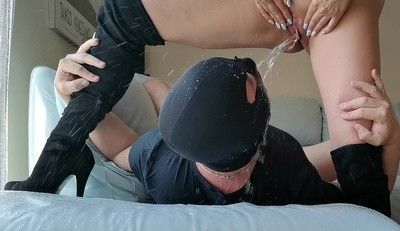 Mistress Valeria wanted this guy to drink her pee and she told him as much. But he did not want to do it and she was not going to let him get away with it. The mistress took a bowl and she peed into it. She then went ahead and she gave it to him and made it mandatory for him to drink it. He knew she would not let him get away without drinking it so he did.

Mistress Jardena found out that this guy was conning her. He was a broker and he did all he could to make sure he got more money than he deserved to be getting. The mistress chose to use shit to deal with the guy and she was keen on seeing how he would behave after she had taken a shit on him. He changed because he did not want to experience that again.

Mistress Amirah wanted to make a kinky pee video. So she looked for a guy who was desperate enough to do it with her. She did not need to do much to get him to agree. All she did was to tease him a little bit and flirt with him and he was like putty on her hands. She then had someone else film as he drank her urine while she smoked.

These mistresses did not like this guy's tiny dick and they could not mess with him. So they felt the best thing to do was to have fun at his expense since they could not have fun with him. The mistresses had a great time torturing him with pee as they forced him to drink their urine. In addition to the urine, he had to endure being farted on by the mistresses.

Goddess Luna mouth fucks boyfriend then pees on him

Princess Adelaide and princess Georgie were asked to quench this guy's sexual thirst and they pretended that they had agreed and they went home with him. But he was shocked when they turned him into a pee drinker. The mistresses told him they were quenching his thirst and they were doing it their way and not his way. He had misunderstood them and now he was suffering the consequences of being gullible.

Mistress Lola wanted her money back from this loser and she was pissed to find out that this guy was not going to honor their agreement. The mistress got pissed because she had made plans with their agreement. She did not want to look for another source of money so she forced him to give her the money back. And the angry mistress did this by peeing on the loser.