This mistress did not like the fact that her slave had disrespected her friend. She did not want to have a slave who only respected her and not her guests. So she punished him and did it cruelly for it to sink home faster. Together with her friend, they pissed on him and forced him to drink their pee. He did not have a choice and drank it promising not to disrespect anyone.

Mistresses punish guy for not paying back debt

Mistress Gaia and her friend wanted this guy to honor his debt. He had refused to pay them back their money. It was long overdue and they were pissed at him. They forced him to give it back by torturing him cruelly. The mistresses undressed and made him drink their pee even as they tied his balls and crushed him. He was in pain and he gave them their money that same day.

Mistress Julia wanted to prank her slave. She knew he had never taken wine before so she planned to make him drink her pee instead. She pissed into a wine glass and she had her own genuine wine which looked like wine. She then made him drink after telling him how expensive it was. The slave drank it and wondered why it tasted off then she told him to taste hers and when he asked about the difference, she laughed and told him he had drank pee. 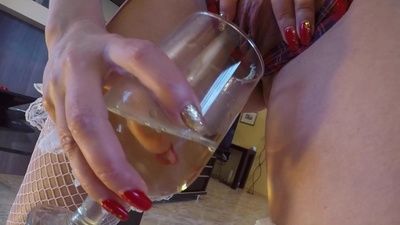 Mistresses gang up on girl and punish her

Mistress Barbara and her friend Rosella found out that this girl was behind the nasty rumors about them. They were pissed and had to do something about it. They did not want their names to be soiled so they punished her. They trampled her and turned her into a human toilet. They forced her to drink their pee from the floor before they made her go and correct her wrongs. 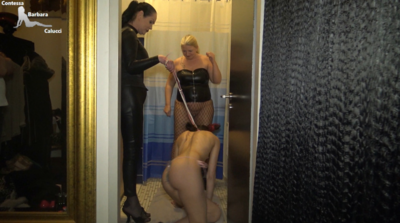 Mistress degrades loser for pissing her off

This mistress loves pee. She loves to have fun with her pee and when she feels like it, she enjoys torturing other people with her pee. Today this loser messed with her and she decided to teach him a lesson. She did not restrict herself to pee fetish only. She pissed on him but she felt it was not enough so she shit on him as well and he ate a mixture of the poo and the pee.

Mistresses humiliate guy for disappointing them

Lady Lisa did not like how her slave disturbed her. He wanted wine and she did not have any to give him. Moreover, it was not a right but a privilege. She decided to show him his place in that house and she did it cruelly. She pissed into a glass of wine while he watched and she made him drink it. She also had him lick her boots clean.

Mistress Rosella is a cruel mistress. She likes to do cruel things to her slave because that is how she likes having her fun. Today she felt like humiliating a female slave. She had never humiliated one before so she was excited about it. She had the female slave wear a leash on her neck and she used it to guide her. She then forced her to open her mouth and she stood over her and pissed into her mouth.

This guy thought that just because he was loaded, he could be rude and do what he wanted to these mistresses. They would have none of it and instead, they taught him a lesson. The mistresses decided to make it as cruel as they could. They decided to piss on him and they made him drink the pee and swallow it. They also had him lick some from the floor.

Mistress Jane and her friend caught this guy with stolen items in school and they had to do something about it. He begged them not to report him to the authorities and they agreed. But they were not about to let him walk away scot free so they pissed into a glass in the class room and they forced him to drink all their pee as punishment. He had no choice.